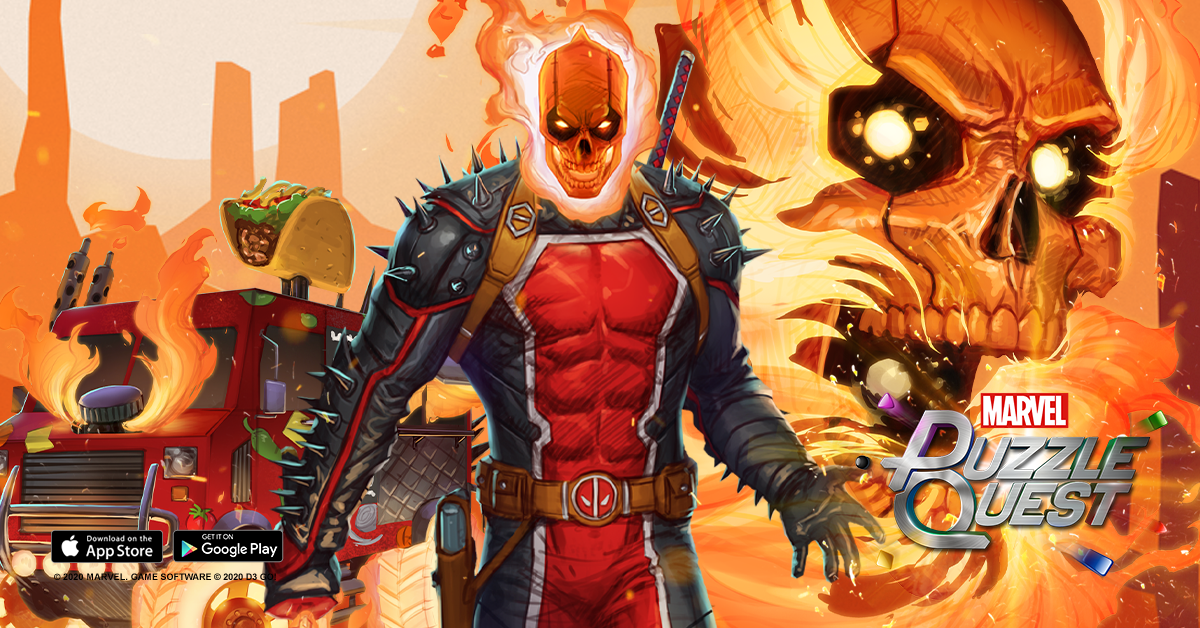 "Deadpool was hired to eliminate a popular taco truck vendor. But when he arrived to do the deed, he was swayed by their delicious “Hellfire” Tex-Mex and decided to spare them instead. It was then that Deadpool’s mysterious client appeared: Mephisto!
Due to Mephisto’s Hellfire chillies, the vendor found new success and celebrated by donating free food to the community. But charity wasn’t part of the deal; the price had to be paid. In a rage at Deadpool’s mercy, Mephisto forced him to take on the Spirit of Vengeance! Now, he spreads hellfire and delivers punishment along with his fellow Ghost Riders (that is, when they aren’t bickering)."
(Abilities listed at level 255, followed by 450)
14191 Health / 57038 Health

AP
Step up and try one of my tasty Tex-Mex treats! All my food is lovingly cooked over a roaring Hellfire grill. Take a moment to chow down and think about what you've done.

Here's what's on the menu for today:
Tacos Diablos ﻿- The devil made them do it. Deals damage to the target equal to 80% of the damage they've dealt this mission.
Disgrace-adilla ﻿- For an additional 3

- Destroys 3 tiles in the target's strongest color. (Destroyed tiles do not generate AP.) (Destroys 4 tiles at Level 5.)
Fajitality ﻿- For an additional 3

AP
My sweet ninja-swords have been imbued with the power of VENGEANCE! Their Hellfire chains will hold the enemy in place while I whale on 'em for making poor life choices!

PASSIVE
(PASSIVE) Hoo boy, you look so guilty right now. Must be all that AP you're carrying. Yup, definitely the AP - I can clear that conscience for ya. Whenever you make a match in the target's strongest color, I'll take one of their AP in that color and deal 657 damage. This is a service I provide as a Spirit of Vengeance. (Max level 2642 damage)
Release Schedule