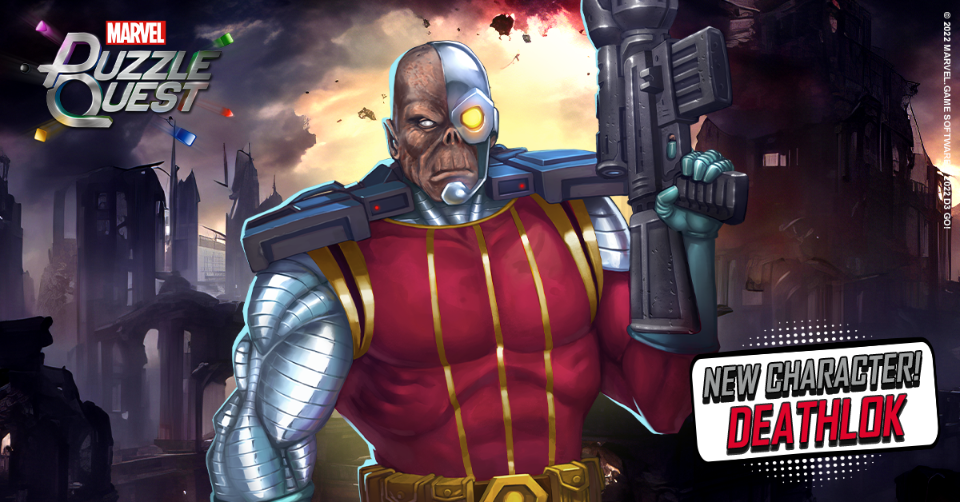 Deathlok (Michael Collins)4-Star Rarity
Affiliations: Heroes, Defenders, S.H.I.E.L.D., Technologists, Enhanced
"A brilliant computer programmer specializing in AI driven prosthetics, Michael Collins was betrayed after he complained about his creations' ultimate use as weapons. He was then put into the cyborg weapons platform that he unwittingly helped design. While under the control of his new body's AI, Michael committed atrocities he could not stop. Now in control of one of the most advanced biological weapons platforms ever made, he puts his considerable strength to use for the forces of good as Deathlok."
(Abilities listed at level 70, followed by 270)
4816 Health / 17837 Health

PASSIVE
(PASSIVE) Deathlok focuses his destructive arsenal on a single target. Whenever Deathlok's team makes a Red or Blue match, he gains a Focus Point (Up to 10). Each Focus Point increases allied damage dealt to that target by 43. If Deathlok's team deals match damage to another target, he loses all Focus Points.
Combat Strategist - 9

AP
Deathlok's computing power can't see the future, but he can calculate it. Deals 1012 damage, ignoring Protect tiles, Invisibility, and Airborne. Deathlok then gains 333 burst health as he repositions.

AP
Collins can unlock his Encephalonic AI - but at what cost? Choose a basic Black tile, creating a 3-turn Fortified Black Countdown tile that increases Deathlok's base Focus Points to 3 and at the start of each turn, deals 50% of Deathlok's Focus Point damage bonus to all other characters, ignoring Protect tiles, Invisibilty, and Airborne.

(JK about that all Florida. Your heart rate can now return to normal)