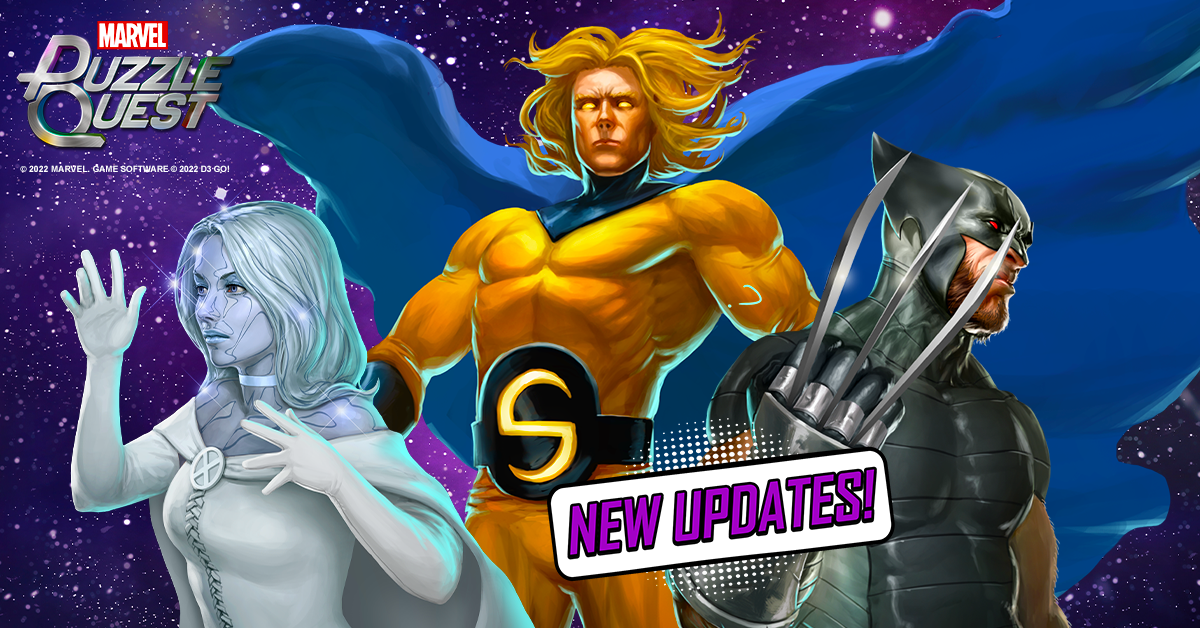 It's time for a batch of character rebalances, just in time for Emma to join her 3 and 5 Star versions in their release, for Wolverine to enter Arcade's Murderworld, and for Sentry to pit his strength against the new psychic powerhouse of Emma Frost! These changes will be imminently available (planned for implementation on 9/30), so take a gander now to get used to what you'll be working with!
Let's get right in to it.

This adds a function similar to Spider-Man (OsCorp)'s ability to keep an opponent from using any abilities while it's available. However, since it goes away when the opponent is downed or Emma changes forms, it's not a *pure* lockdown. This should make the ability more generally useful and not as much of a pure niche SAP tile destructor.

Girl's Best Friend - 11 Black AP -> 7 Black AP
Will now Fortify friendly specials THEN basic tiles if none are available instead of ONLY fortifying specials and fizzling if none are available.
Diamond Form - PASSIVE -> 7 Black AP
Changes Diamond Form into a hybrid Active/Passive. It still works the same in that it increases her damage while disabling other abilities, but you can now use 7 Black again (or destroy the Fortified tiles) to return to normal form.

Adds: Cannot be stunned
Adds: Reduces incoming match and ability damage by 25/30/35/40/50% while in Diamond Form

These changes to these two abilities do a couple of things. First of all, it makes them cheaper and therefore more generally useable. Secondly, it provides a way to get OUT of Diamond Form that doesn't require getting rid of up to 6 specific Fortified tiles, which can be nigh impossible. Finally, it turns Emma into a true bruiser while in Diamond Form instead of making her more of a glass (hah) cannon.

Labor For Learning - 8 Yellow AP
Pretty simple change for this one: Doubled the strength of the created tiles as well as the improvement of the tile by the Repeater.

Simple but effective. This turns the ability into one that measures up to Rocket and Groot's Blue while keeping the number of created tiles relatively low while Rocket will soon fill the board with tiles and essentially max the strength available while Emma will keep up with improvement.


Wolverine (X-Force)
X-Force - 8 Green AP
Another simple but effective change to this one:
Increased damage for the base attack by 400%, and increased the damage for destroyed tiles to 3x tile damage.

This turns X-Force from a board shake into a real damage ability, and something that you don't want to see.

This restores its functionality roughly to what it was way back in the day. At the time, this ability was super powerful and the AP destruction/generation was worried to create winfinites or no-win scenarios. With more knowledge about how the game works and a changed meta, the old version of the ability makes a strong return.

By reducing the AP cost to a fairly low amount, it makes this a more reliable form of healing for Wolverine. As well, the increased damage per tile destroyed adds a bit more punch to the ability, making it something to really watch out for if you need to decide whether to let Wolverine heal or stop it by matching the tile away.


Sentry
Supernova - 11 Red AP
Removed "Ends the turn" on use
Added an in-battle function to show the number of Red tiles on the board.

At its tier, Supernova is already a strong nuke when enough tiles are on the board. Not so much a direct buff, but a couple mechanics changes to make the ability more generally useable.

World Rupture - 12 Green AP -> 6 Green AP
Reduced damage per tile slightly, but at the original 12 AP/damage. This is an overall damage buff as a result.
Added: Ignoring Strike tiles

This ability flipped between being alternately fairly useless to being massively OP depending on if Strike tiles were available, since each CD created would be affected by the Strike tiles. With this change, the ability is fairly "standard" in the amount of damage it will deal by ignoring Strikes, but with the reduced AP it means that Sentry will be using this ability FAR more often. In testing, this turned the ability into a nuke that the player needs to chase quickly, as it was often the case that between this and Supernova, Sentry could get another World Rupture out very quickly, making for more and more mounting damage.

Sacrifice - 8 Yellow AP
Added: Created tiles are Fortified
Increased the number of created tiles from 1->2
Increased self damage to ~25% of base health

These changes make Sacrifice MUCH more scary when used. Instead of a single randomly placed somewhat powerful tile on the board, there is now *2* *Fortified* tiles placed instead. This makes it so that when its used, it's a real power multiplier at the cost of Sentry's health. Ya know... a sacrifice.