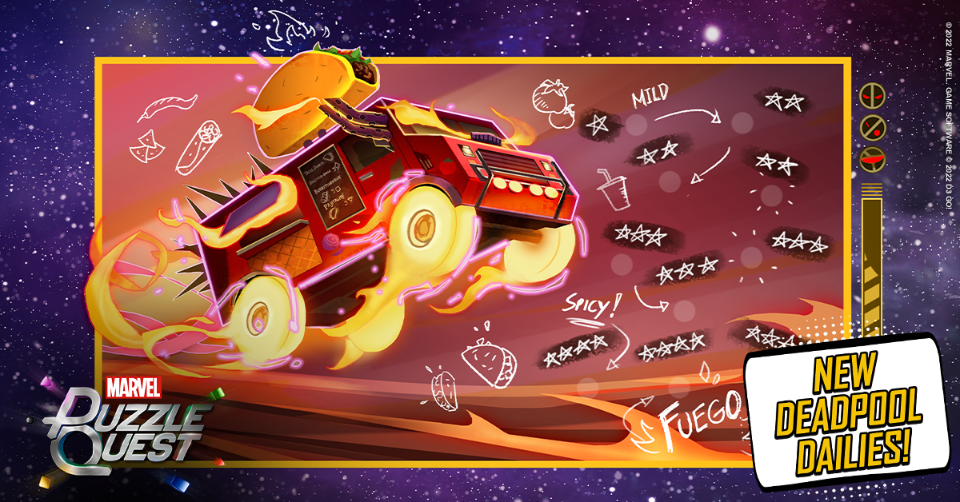 New updates to Deadpool’s Daily Quest! New challenges, new times, new rewards!
Deadpool Dailies will now reset on a 7 day schedule from a 5 day schedule, resetting on Mondays. You could set your watch by it, if your watch told the days of the week. Which it probably doesn’t.

Update overview:
- As of 9/19/22, Deadpool Daily will reset on Monday for a 7 day cycle
- There are two additional nodes, containing new challenges and rewards
- Every other Deadpool Daily will contain TWO Crash of the Titans nodes
- Progression rewards have been updated
- 3/5 Star release cadence changes
- Roster Slot pricing will be updated

The two new nodes are easy to come to grips with, having the same enemies as you’re used to facing in the Behemoth Burrito, but with different team requirements making for an interesting battle.

These team comps are chosen so that players that are capable of putting up a strong enough 2-Star team or are into the 3-Star roster land can defeat this set of enemies and get a Mighty Token, and similarly agents of higher power can get a set of Hero Points out of the new “I’ve Got a Golden Disc… et” node every day.

As well, we’ve updated the Iso-8 rewards on the left hand side of the map with double the Iso for each node. This isn’t much on a day by day basis (1500 Iso), but 3K a day over the course of a month really stacks up for completing a bare two nodes.

Crash requires a little more explanation. Currently, there is a Crash of the Titans every 5 days rewarding 6 tokens every 30 days in total. We wanted to make sure we kept to this cadence with the 7 day version. So we decided to double up every other run, making for an average of 6 tokens every 28 days instead. The big difference here is that the second node will use the SAME character that week. So if you need Nova for one pin, you’ll be using him against another for that week too. If you’re interested in those juicy Legendary Tokens, better get your roster ready for more tough battles!

Progression Update
One thing to note is that the progression rewards have *not* been updated to take these new points you can earn into account. This means that for players that happen to be missing a required character for either Dat Required Character or Behemoth Burrito, there’s an opportunity to earn those points in these two new nodes instead.

Graphical Updates
With two new versions of this event we’ve also taken the opportunity to update the art as well, creating two all new varieties of backgrounds featuring both Deadpool (Spirit of Vengeance) and Lady Deadpool. Enjoy the added eye candy!

3 / 5-Star Releases
With the next 5-Star releases, we’ll also be releasing a 3-Star version of that character as well. These characters will be designed and presented similarly to other older 3 / 5-Star pairings such as Doctor Strange and Gambit. Essentially, their ability sets will carry similarities, but also be meaningfully different from one another.

Release schedules for these new pairs will be much like a normal 5-Star release with that character having their own release event, being available in a special HP store, then going to Legendary Packs around the time of the next Versus Event season. The difference is in how the 3-Star will be released.

3-Star Release Cadence
While the 5-Star release cadence is unchanged, 3-Stars are all new. To get these new characters out in the world, we’ll be doing the following:

Launching a 3-Star Versus Event featuring them at the same time as the Release event for the 5-Star. This means that you’ll *immediately* get to play with a loaner of the 3-Star version.
Putting the 3-Star into applicable packs *the same day* as release. You’ll be able to pull the 3-Star from Heroic tokens, Versus packs, etc. right away.
Heroic and Mighty Packs will temporarily have increased odds on the new 3-Star.
Adding a 3-Star Step-Up Bundle on release for those who want to get a jump start on growing out that character. This bundle will contain a number of covers for that character, allowing agents to level them up, even get them into Champion status immediately.
And the big one…

Roster Slots
One thing that agents have brought up quite a bit since we’ve announced 3 / 5-Stars coming down the pipe is that Roster Slot costs are going to get really expensive really quickly, especially for those at over 300 characters. And for those below 300, they’ll be getting an extra character per rotation now, so they’ll hit that mark quicker.

We’ve answered that our intention is not to put monetary pressure on players with these new releases; instead we want to allow for more variety in play across play levels. New players will get cool new releases to play with that they couldn’t get yet in 5-Star land, and veterans will get new characters to use for lower tiered combat and to fill in meta gaps that the lower number of characters around there bring. Not to mention the extra Champion rewards that will be earnable from a new character.

So, we’ve decided to do the following to alleviate that:
- With the launch of the first 3 / 5-Star, we’re cutting Roster Slot costs for slots over 300 from 2000 HP to 1200 HP.
- As noted above, we’re also adding in a daily infusion of Hero Points in Deadpool Daily.

The net result of these two changes is that Hero Point outlay for Roster Slots for many players will actually slightly *decrease*, while also defraying much of the cost of those players that are rostering multiples of all the new characters for Champion farming purposes and have already (or will soon) hit that 300 Slot count.
To note, as with most monetization/pricing changes, we’ll be offering a refund on Roster Slots recently purchased to alleviate feelings of “missing out” on the lower prices if you would otherwise have waited. If you made any Roster Slot purchases from 9/8 till the changes go Live and you feel that you wouldn’t have done it knowing this change, toss a ticket into CS and we’ll take care of it.