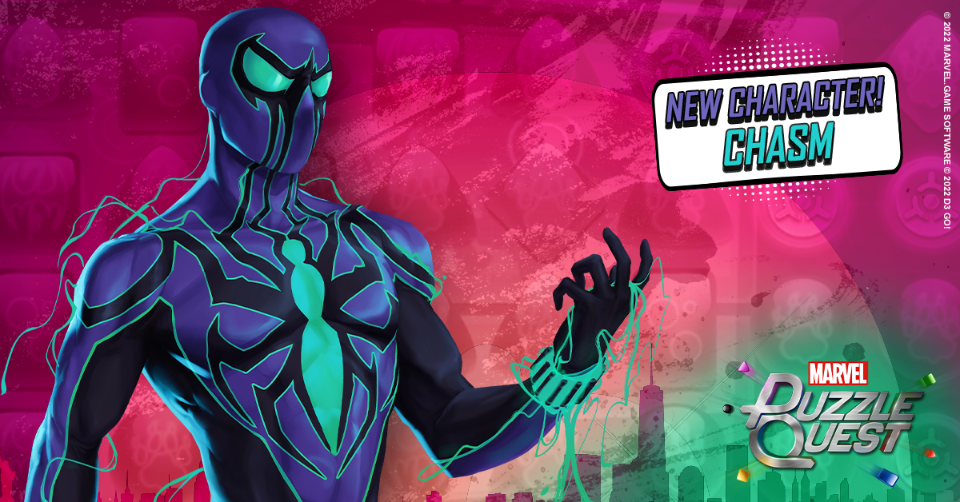 Chasm (Ben Reilly)5-Star Rarity
Affiliations: Villains, Spider-Verse, Street Level, Enhanced
"It's hard knowing who you are, finding yourself, making sense of the world... Ben Reilly would know! Being Peter Parker's clone and sharing his memories, his powers, his ideals: it's never been easy. That's life though; Ben's spun his own web under several guises over the years - and after joining the Beyond Corporation, he finds a place as Spider-ManⒸ doing some real good! But what happens when someone abuses his trust, goes thrashing through his memories, and liquidates him in quantum-shifting polymer meant to rewrite matter? It leaves a void. An abyss. A Chasm."
(Abilities listed at level 255, followed by 450)
19314 Health / 77630 Health

PASSIVE
(PASSIVE) Whenever Chasm makes a match, he converts 1 random tiles into Abyss tiles, and whenever an Abyss tile is matched or destroyed, he creates 1 random Web tiles. Abyss tiles do not award AP when matched. At the end of each turn, for each Abyss tile on the board up to 1, both teams lose 1 AP from the front character’s strongest color with 1 or more AP, then Chasm and the enemy team’s character in front take damage equal to Chasm’s match damage in that color + 133 damage. (Max level 534 damage)
Stare Into the Void -

PASSIVE
(PASSIVE) If you gaze into the Chasm, the Chasm gazes also into you. At the start of the match, stun the enemy team for 1 turn. If Chasm is downed and there are 5 or more Abyss tiles on the board, Chasm is revived with 20% health, plus 2% health per Web tile on the board (max 10), then he destroys all Abyss tiles on the board and stuns the enemy team for 1 turn. Whenever a Web tile is matched, Chasm heals 266 health. (Max level 3 revive health, 1068  match health)
Empty Inside -

All times in Pacific

Rewards tokens to the There Is Only Chasm vault

Chance to get Chasm (Ben Reilly). Increased chances in 10x and 40x pulls

Chance to get Chasm (Ben Reilly).