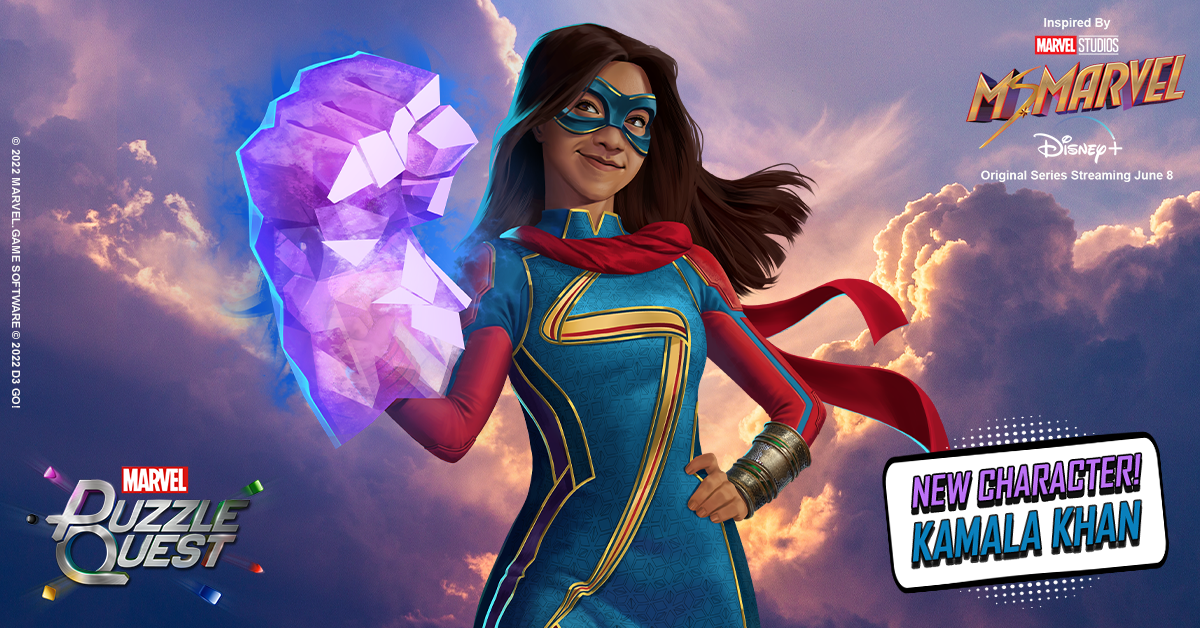 "Kamala Khan is just your average Pakistani-American Muslim 16-year-old growing up in Jersey City. She's a great student, an avid gamer, and a voracious fan fiction scribe. While she's got the best family and friends in the world, they might be a close second to her greatest love of all: Super Heroes, capital S, capital H. Kamala's got a very special affinity for Captain Marvel in particular. She often feels caught between many worlds, and she struggles to feel like she totally fits in at home or at school. That is, until she gets super-powers like the heroes she's always looked up to. Things must be easier with super-powers, right?"
(Abilities listed at level 255, followed by 450)
14541 Health / 58447 Health

AP
"Whoever saves one person, it as if she has saved all of mankind". Kamala reaches out and generates a shield of crystallized light, creating 9 strength 89 Protect tiles and clears any stuns affecting her allies. If a Study tile exists on the board, she also fortifies 4 of those tiles. (Max level 356 Protect tiles)
Embiggened Blast - 7

AP
Kamala destroys a random 3x3 block of tiles and dealing 266 damage to the enemy team. If a Study tile exists on the board, she instead selects the block of tiles to destroy and deals 107 extra damage. Destroyed tiles do not deal damage or generate AP.

AP
Kamala goes airborne for 2 turns and creates a 2-turn Repeater tile that Fortifies and Converts 1 friendly Special tile(s) to Yellow or Green and creates a 6-turn Fortified Blue Study Countdown tile that powers up her other abilities. If one already exists she instead improves 2 random friendly Strike, Attack, or Protect tiles by 50%.

(PASSIVE) Whenever an enemy uses an Ability, Kamala generates 3 AP in one of her colors.

Rewards tokens to the Super Heroes ONLY vault

Chance to get Kamala Khan (Origin). Increased chances in 10x and 40x pulls

Chance to get Kamala Khan (Origin). Increased chances in 10x and 40x pulls