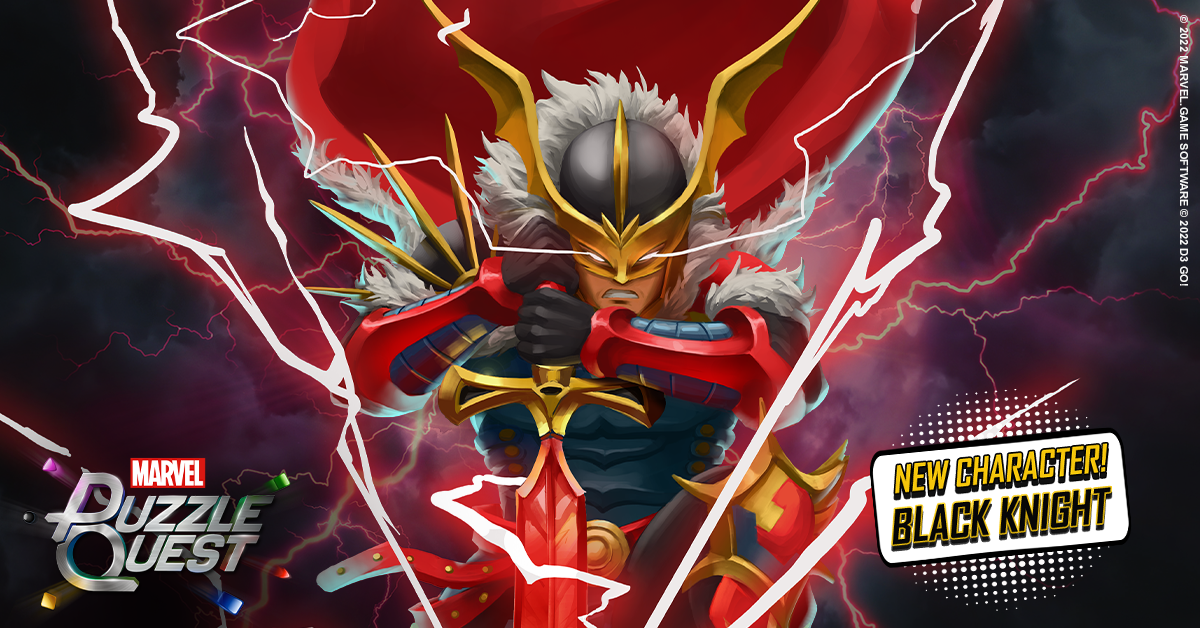 "Burdened by a heavy past and wielding the Ebony Blade, Dane Whitman forges a new legacy as the Black Knight. A long time on-and-off member of the Avengers, he saw many dimensions and traveled across many ages.

Now Black Knight soars through the skies on his winged horse trying to find the world that accepts him for who he is."
(Abilities listed at level 70, followed by 270)
4223 Health / 15642 Health

AP
The Ebony Blade protects its wielder from any dangers. Deal 93 damage and, if one does not exist, create a Black 4-turn Fortified Countdown tile. While this tile is on the board, this power becomes Knight Eternal.  (Max Level 180 damage)
Knight Eternal -

PASSIVE
(PASSIVE) Black Knight cannot be Downed. If Black Knight would be downed, his health drops down to 1 instead. Whenever a friendly Countdown tile reaches 0, if there are 4 or more Charged tiles on the board, restore 93 health and destroy 1 Charged tiles. If there is no Knight Time tile on the board, this power becomes Knight Time. (Max Level 180 health)
Dane From Above - 8

AP
Black Knight rides his winged horse to the skies to attack and protect from above. Black Knight goes Airborne for 2 turns.

(PASSIVE) If Black Knight is Airborne at the start of the turn, fortify a friendly Black Countdown tile, deal 185 damage to a non-target enemy and create 2 strength 19 Protect tiles. Whenever Black Knight returns from being Airborne, create 2 Charged tiles. (Max Level 361 damage)

All times in Eastern

For a limited time between April 21 and May 1, all players that log into MARVEL Puzzle Quest will get a free Black Knight (Dane Whitman) cover as a special thank you for participating in the New Character Poll earlier this year.