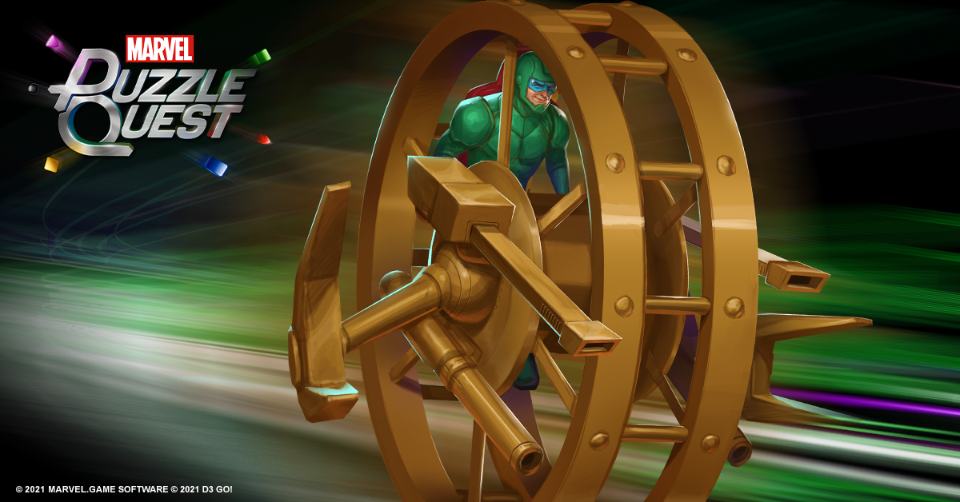 "Jackson Weele was a corrupt businessman who, when faced with hubbub surrounding his crimes, geared up and turned to the streets for revenge and profit. After a brief retirement, he now pilots his bespoke molybdenum steel vehicle as the fearsome Big Wheel."
(Abilities listed at level 255, followed by 450)
18394 Health / 73934 Health

AP
Show's over, spokes: Big Wheel goes into overdrive and rolls over everything in his way. Rotate the center 2x2 block of tiles (including Locked tiles), removing any special tiles in that block, and dealing 426 damage to the enemy team. Then, Big Wheel deals 117 damage to a random enemy for each Speed Point he has. (Max level 1713 team damage, 472 damage for each Speed Point)
Tread On Me - 7

AP
No need to reinvent the wheel when Big Wheel's molybdenum steel treads can turn his target into scrap. Choose a tile and rotate the 3x3 block of tiles around it (including Locked tiles) removing any Strike, Attack, and Protect tiles in that block. Deal 605 damage, plus 186 damage for every Speed Point that Big Wheel has. (Max level 2433 damage, plus 750 damage for each Speed Point)
Wheelhouse -

PASSIVE
(PASSIVE) Big Wheel tirelessly builds momentum, proving he's not all torque. Whenever Big Wheel's team makes a match beyond the first in a turn, Big Wheel gains 1 Speed Point. If Big Wheel has 6 or more Speed Points at the start of your turn, Big Wheel spins out, rotating the board (including Locked tiles) and dealing 422 damage per Speed Point, then reducing Speed Points to 0. (Max level 1696 damage)