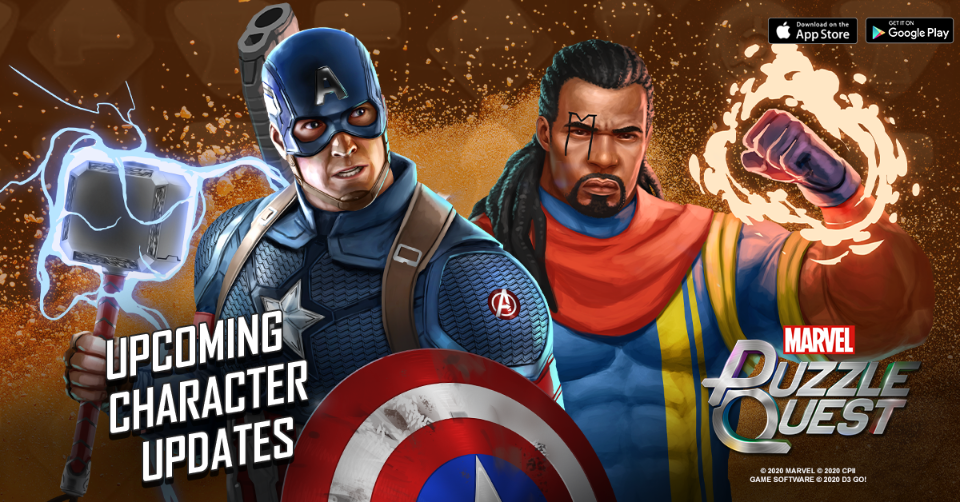 We’re going to be making changes to a number of characters coming up fairly soon. Our general plan is to have these changes in place during the coming offseason, after the next client update releases.
Which characters?
That’s right, Bishop is going to be getting some gameplay changes! Without further ado, the upcoming changes are below.
Captain America (Worthy)
Heavy Hitter - 9

AP
Reduced the damage from the initial strike slightly, changed around the deltas between levels on the Charged tiles to make it a bit stronger at Levels 1-3, and raised the cap on bonus Charged tile damage to 9 max tiles (from 6).

AP
Increased the damage for both the Countdown tile and the Passive damage from enemy Charged tile matches.

PASSIVE
Previous: Captain America jumped to the front if a certain amount of damage was given and reduced that damage. He’d then create multiple small Countdown tiles that converted Yellow tiles to Red or Blue basic tiles.
Now: Captain America jumps to the front if the enemy makes a Match 4 or greater, *negating* the damage from that attack. He then creates one Black Countdown tile that changes Yellow tiles into Red or Blue Charged tiles. Levels lower the Countdown tile timer and raise the number of Charged tiles created.
Essentially, this ability used to be one where Cap would constantly be jumping to the front and negating damage against pretty much every 5-Star enemy attack, then making tons of Red and Blue tiles through converting the Yellow tiles. This made him incredibly powerful against enemies higher than his power band, incidentally powering up his ability to stun those same opponents soon after. Now, he’s more  powerful against match-4s and any opponent that puts those out regardless of tier. Meanwhile, the Countdown tile is much more powerful when it goes off, but isn’t a sure gain, since it will now take multiple turns for one tile as opposed to single turns for multiple tiles.
Archangel (Classic)
Archangel has received a couple of minor but very useful updates to his abilities by lowering the AP cost of both Angle of Attack and Enemy Down. As well, he’s had his base stats raised.
Base Stats
13343 Health -> 16618 Health
Old

AP
No change to the ability, but AP cost has been reduced by 2.
Enemy Down - 10

AP
Damage of this attack has been increased. 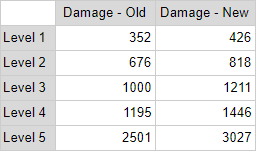 AP
Damage of this attack has been increased. 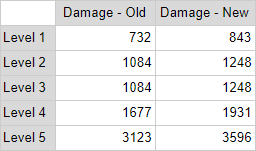 Jubilee (Uncanny X-Men)
Jubilee has also received some changes that raises her usefulness for her Passive Heart of the Team, as well as her gem color changing Light Show.
Heart of the Team -

PASSIVE
Each level of this ability requires one less Charge tile to activate for her allies, now requiring only 2 Charged tiles on the board to activate at Level 5. As well, bonus damage has been increased. 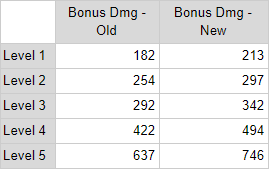 AP
No change to the ability, but AP cost has been reduced by 2.
The Hulk (Totally Awesome)
Amadeus Cho loses none of his ability to chomp down on delicious health restoring hot dogs during battle. He does, however, GAIN damage in his Mastermind Excello, as well as reduce the Countdown tile timer on his See the Math of It ability.
Mastermind Excello - 13

AP
This ability has had its damage increased by a large amount, as well as a minor tweak to levels 2 and 3. These levels now require one less Blue AP to activate for bonus damage (from 14 to 13).

See the Math of It -

PASSIVE
The Countdown timer for Level 2-5 has been reduced by 1. This means that level 5 has a 2 turn Countdown tile.
Bishop (Classic)
Bishop has had an overall rework to his Overclocked and General Reserves abilities, as these are the ones that had major effects across power bands . Overall, Bishop keeps his ability to protect teammates, deal damage to his opponents, and create Blue AP while doing it, but the methods by which he does so change from direct incoming damage to something more directed actively by the player using Bishop.
Overclocked -

AP
This ability has been updated in a large way. Instead of being Passive, it is now an active ability, and functions a little more broadly than before as a result. The new ability is as follows:
(PASSIVE) Bishop absorbs his enemy’s attacks, storing them up for an explosive blast. Create a 3-turn Fortified Black countdown tile. While this tile is on the board and one of Bishop’s teammates would take damage, Bishop jumps to the front. When this countdown expires, Bishop deals 55% of the damage he took while the countdown was on the board to the target.
General Reserves / Energy Conversion -

AP
Along with jumping to the front and dealing damage to everyone with Overclocked, Bishop also acted as a large Blue AP battery with his General Reserves by creating AP at relatively low levels of incoming damage. This ability has now been changed so that he still creates AP, but by being in front, not by taking damage, as well as reducing the gained AP. Additional changes are an AP reduction for Energy Conversion and an additional effect that he will create Green Protect tiles on triggering General Reserves. The new abilities read as follows:
General Reserves -

PASSIVE
(PASSIVE) With every injury, Bishop grows stronger. At the start of your turn, if Bishop is in front, gain 1 Blue AP and creates a strength 11 Green Protect tile. (max level strength 22 tile)
(PASSIVE) If Bishop has 8 or more Blue AP, this power becomes Energy Conversion.
Energy Conversion - 8

AP
Bishop focuses the energy he’s stored into a powerful blow, disabling his enemy. Deal 46 damage to the target and stun them for 1 turn(s). (max level 90 damage).
(PASSIVE) If Bishop has less than 8 Blue AP, this power becomes General Reserves.
With these character changes, we will be offering increased sellback prices for Captain America and Bishop as per usual for these style of changes/reworks. These are planned to last until October 1st. However, given that the changes to Archangel, Hulk, Jubilee and Thing are purely increases, we are not planning on increasing sellback prices for those characters.
What do you all think?
Last Updated: 142d • Permalink
ICP 2020026027-1